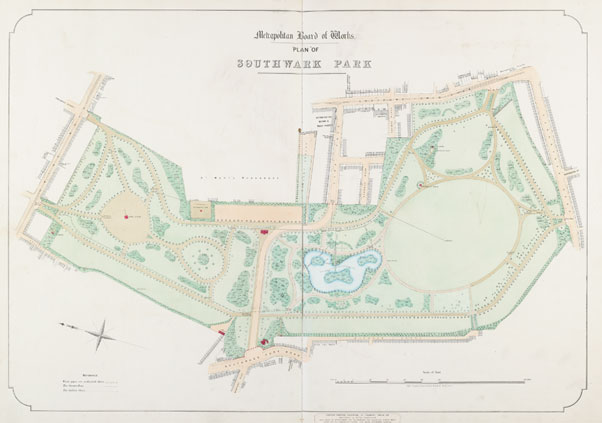 This year marks the 150th anniversary of the opening of Southwark Park to the public on 19th June 1869. Pat Kingwell looks back at some events in the month of March in the past which shaped the park we have today.

March 1866 the Rotherhithe Vestry discussed the delay in forming the park. Almost two years after the passing of the Southwark Park Act in 1864 there was no obvious progress in turning the market gardens into a park. Concerns were expressed at the Metropolitan Board of Works by local representatives Cyrus Legg and Edward Collinson. It was explained that although Lord of the Manor Sir William Maynard Gomm, the principal landowner, had agreed sale of the land, the rights of lessees and sub-tenants remained under arbitration. Another year passed before the Board finally took possession of all of the land.

possession of all of the land.

March 1867 the Board of Works approved plans for entrance gates, a Superintendent’s lodge, fencing and roadways.

25 March 1870 a deputation of Bermondsey and Rotherhithe inhabitants called on the Board of Works to reconsider their policy of building houses on sixteen acres of the margins of the park. The Rev. Robert Marshall Martin of Christchurch, Lower Road, spoke for the deputation. This followed a public meeting held at The Star Corner School Room Bermondsey on Wednesday 16th March at which the following resolution was passed: “That, considering the great importance of open spaces to the health and improvement of the people of large cities, and considering the limited extent of Southwark Park, it is the opinion of this meeting that it is most undesirable to appropriate any portion of the Park to building purposes.”

March 1871 the Board of Works approved the first set of Southwark Park by-laws and agreed the supply of felt hats for men employed in the park.

March 1880 the Board of Works commenced an investigation into the management of the park. Charles Jackson, a former Constable, had brought charges against Superintendent Charles Dennis “of living in open adultery with another man’s wife in the Board’s lodge, and also demanding £30 as his share of the money received for the cricket ground in Southwark Park in years 1877-78.” The Clerk to the Board reported that “…I have reason to believe that an extensive system of fees has been in practice in the park for some time past, and that other irregularities have occurred…” Some months later Dennis was forced to resign.

March 1884 the Board of Works approved the production of 250 copies of Southwark Park Plan from lithographs at a cost of £18. The Board also approved the replacement of old wooden fencing on edge of certain paths by new iron, unclimbable hurdles at a cost of £200. The wooden fencing was described as “unsightly” and having been in place since opening of the park in 1869.

March 1891 Cambridge Harriers held their first annual sports day on the Oval. Upwards of 1,000 people attended. The Southwark Recorder reported that although “a capital programme was presented, unfortunately the harriers were unable to carry it out because of the conduct of some of the spectators, who had evidently assembled with the intention of spoiling the arrangements…. The running high jump went smoothly until the five feet jump, when a party of roughs broke into the ropes and the sport had to be brought to a hasty termination. All further sport was now entirely suspended…the officials deserve great praise for the manner in which they worked under such trying circumstances.”

25 March 1893A letter was published in the Southwark Recorder and Bermondsey and Rotherhithe Advertiser about misbehaviour in the park:

“Now that the summer is approaching it may not be out of place to call attention to an annoyance that visitors to Southwark Park are subjected to every Sunday. On one side of the lake about four or five seats are taken possession of by a number of youths who insult and annoy persons as they are walking around that portion of the grounds. This is very unpleasant, especially to ladies, as the language used by these roughs is in many cases disgusting. There seems to be a regular gang as the same faces may be seen Sunday after Sunday. Surely the London County Council would take steps to suppress this state of affairs if they knew of the existence of such an abuse. Yours Cavalry.”

2 March 1901A much enlarged sandpit for children was opened on the same day as the London County Council elections. The Southwark and Bermondsey Recorder reported: “How much of a joy has been incited by the existence of the sand pit in Southwark Park cannot be computed! The children delight in it, and as the Borough of Bermondsey compares very favourably with other parts of London with regard to juvenile life, the joy is fully commensurate with the quantity of sand. Now that the sand in the pit is 100 per cent. more than previously, it is anticipated that the merry shouts and peals of laughter will prevail to an unprecedented extent.  Whilst the election of County Councillors was proceeding on the 2nd inst., and as a heavy shower of rain was falling,  threatening to wash away what little ardour the morning voters seemed to possess, Messrs. A. Pomeroy and H.J. Glanville, candidates and Councillors, were engaged in inaugurating the enlarged sand pits. The children of Bermondsey had exhibited such interest in the pit and discovered such fertile powers of delight therein, that the County Council determined to double its area, so that now instead of 150 tons of sand there are 300 tons waiting the advent of fine weather and the visits of the little ones. The opening ceremony was quiet in the extreme, privacy and Jupiter Pluvius securing that result, but the quiet acts often prove of great portent, and so the half-hour stolen from electioneering to open the little gate in a formal manner means the open door to many sunny hours of pleasure to hundreds of happy boys and girls. Such an attraction to the park is not without its advantages, for the children are looked after by a woman officially placed in charge, and as they play with their spades and pails, building castles almost as substantial as though in air, paterfamilias may be assured of their safety. Juveniles come from considerable distances to take part in the fun, and especially on Saturday the sand pit becomes a veritable hive of industry.”

March 1902 the London County Council granted permission to Grace Kimmins to organise cricket for disabled boys in the park, through the Guild of Brave Poor Things, which she ran from the Bermondsey Settlement in Farncombe Street.

March 1903 the London County Council received a gift of two swans from King Edward VII with a request for £1 payment to the swan-keeper for catching the birds. “I presume under the circumstances, that this account must be paid” wrote Colonel John James Sexby, Chief Officer of Parks.

31 March 1920 an AVRO 504K airplane crashed into the park lake after suffering engine trouble. A large number of children at play had to rush for shelter as the plane descended. The pilot was G.P. Olley and his passenger was F.L. Wells, who was photographing the Surrey Docks. Neither pilot nor passenger were injured. An investigation found the pilot had been flying at an altitude which did not conform to Air Navigation Regulations, and the accident was deemed to be due to pilot misjudgement and engine failure.

March 1930 Southwark Park Bowling Club members attend the funeral of one of their oldest members, Fred Boatman, landlord of the Royal George public house in Jamaica Road. The newspapers reported “a handsome wreath, with the club colours of chocolate and gold attached, was sent.”

March 1933 the London County Council agreed to demolish the Superintendent’s Lodge due to poor ground conditions. A replacement was constructed on the other side of the central drive, and today is a private residence.

March 1934 a Labour Party majority was returned in the London County Council elections. Ada Salter and Eveline Lowe were the local representatives, and the former was appointed as Vice Chair of Parks Committee. Ada Salter soon pushed for investment in the park, in time leading to the construction of the English Rose Garden and a bowls pavilion.

March 1939 with war looming, the park was partly occupied for military purposes and southern end closed to the public. Four anti-aircraft guns and predictors were placed there, and the dressing rooms, store sheds and booking boxes were used for accommodation, storage and offices. Tents and marquees were also erected.

March 1941 saw a number of bombing incidents. Four high explosive bombs caused craters in surface causing damage to a watchman’s shed near Hawkstone Gates. One bomb damaged the wood stock in the depot. Over 100 incendiaries fell and a bomb exploded near China Hall Gate. The lido was closed for the coming summer.

March 1943 following her death, it was agreed toplant a tree in memory of Ada Salter, as an expression of appreciation of her services to the people of Bermondsey. The Tree of Heaven lived into the 21st century.

25 March 1945 at 4.20 a.m. the last V2 rocket bombs to hit Bermondsey landed in the park, one close to St Olave’s Hospital and another in Gomm Road and Rebecca Terrace, where houses were badly damaged. Over 30 people were injured.

March 1953 the London County Council awarded a contract to Cobby and May Ltd of Thornton Heath to build a cafeteria alongside the lido at a cost of almost £5,000, about £119,000 in today’s values. The café opened to the public in 1954.

March 1965 the London County Council awarded a contract to Castle Brothers Ltd., of Lewisham, to build a new staff lodge near Hawkstone Gate at a cost of £14,162, about £247,000 in today’s values. The building stands to this day.

March 1992 Southwark Council approved the permanent closure of the lido, almost 70 years after it opened.

March 1998 Southwark Council applied to the National Lottery Urban Parks Programme for a grant to restore and repair many heritage features in the park. A year later an award was made for works on the bandstand, the lake, the bowling pavilion, the Jabez West memorial fountain and the Ada Salter Garden.

March 2000 a time capsule was sunk outside the Park Rangers base, which is today the site of the present café.

One Reply to “﻿March and Southwark Park”